The latest release is available on the ftp site. You can also go to the gnustep website to download. This version has support for NSStreams, RTFD, Nibs and lots and lots more... go check it out!
at August 30, 2006 21 comments:

Email ThisBlogThis!Share to TwitterShare to FacebookShare to Pinterest
Labels: GNUstep

Although it's experimental at the moment it's working. As you can see here, I'm saving a nib file from Gorm to the "Cocoa Nib" format: 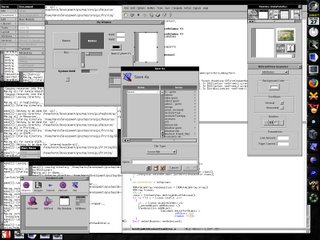 Here is the same nib file after being loaded into IB on OSX: 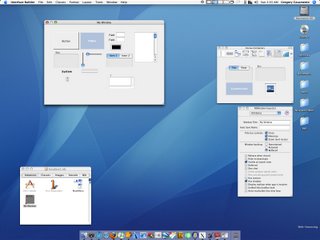 This functionality opens up all kinds of possibilities for GNUstep. It will ease porting by allowing developers to utilize one format or to easy translate from nib->gorm and vice versa. All Mac OS X developers need to do is to make sure they save the nib files as 10.2 or later, and GNUstep will be able to read the archives.

I'm going to continue refining these enhancements until they are perfected. They're very close at the moment, but like anything new they need to be shaken out a little.

Email ThisBlogThis!Share to TwitterShare to FacebookShare to Pinterest
Labels: GNUstep

I read a blog today called "nextbuntu" it can be seen at nextbuntu.wordpress.com. A few things stated on the website are entirely false:

1) That GNUstep has changed the names of the classes "and everything"
GNUstep has done nothing of the sort. For all of the classes in the published API of OpenStep and Cocoa, we have used the same class names, constants, method and function names. Period. It is trivial to port applications from Cocoa or OpenStep to GNUstep so long as Carbon and the Core* libraries (for which we have no equivalent) aren't used. The only classes which use GS as a prefix are private classes which are not part of the NS (Cocoa) framework.

It's immediately apparent that no review whatsoever was done by NeXTbuntu regarding the current state of GNUstep.

2) Graphics makeover
This is something that has been on the top of my personal list, as GUI maintainer, for a long time. RIO and others have made some progress in getting this done on the theme branch.

3) Give the user the option of using cascading menus instead of the menu bar.
GNUstep currently has cascading menus, it also has the capability to show the menu as a menu bar on the top of the screen. To change it is a matter of changing a default.

All of these concerns are known and are being addressed in GNUstep at present. The goal of NeXTbuntu seems compatible with that of GNUstep. The only thing about his post that concerns me is his "dislike" of the GPL. Currently GNUstep is under the LGPL, which is a "lesser" version of the GPL which lacks certain things that some people don't like about the GPL.

4) Mac OS X/Cocoa compatibility
Porting from Cocoa to GNUstep or from OpenStep to GNUstep is quite easy. Please see this link: http://mediawiki.gnustep.org/index.php/Portability for more information. Also, recently, as you may or may not have noticed, I've implemented nib compatibility, so it's currently possible to read/write nib files for use on OS X.

Cocoa compatibility is one of the main aims of the GNUstep project. It's a very challenging one because Apple keeps adding things, so It's a moving target.

5) The Desktop Env. vs Development Env. issue
GNUstep needs to be both, or, at least, have a separate desktop project which is the official desktop.

Conclusion
I would suggest that the person behind NeXTbuntu should contact a member of the GNUstep team such as myself, Richard, or Adam to discuss collaboration. If you are planning on re-writing all of this stuff yourself, good luck, but it would go much more quickly for you to use GNUstep. Also, I suggest you drop the attitude that you seem to have, it won't make you any friends.
at August 25, 2006 26 comments: