Looking back on my last two years as lead, I can see that it is much harder than I originally thought it would be.

I know that I haven't always been perfect, but I'm learning. :) Also, aside from all of that... I've suffered a few very personal losses in the past year and a half that have distracted me a bit from GNUstep, but it's always remained close to my heart.

GNUstep has made some significant progress in this past year in terms of stability, completeness, and usability on UNIX-based platforms and, particularly, on the Windows platform.

I believe that the coming year holds some promise for GNUstep since I have been seeing more interest regarding porting apps for Mac OS X to GNUstep. There have also been a number of new "native" GNUstep apps from GAP and from Etoile.

I think the things we need to focus on, as a project, over the next few months are (this time in priority order):

1) Stability/Polish.
a) We're pretty stable, but there are a few places in GNUstep where we lack "polish." :) We need to make certain that a lot of the little annoyances that we are used to dealing with are taken care of as they make a huge impression when someone first sees an application which uses GNUstep in action. I leave it to other threads/discussions to hash these out, but I will mention one: Menu/Window Focus issues. :)
2) Better compatibility with Cocoa/API completeness:
a) Determine which classes GNUstep is lacking when compared against a given version of Cocoa (TBD).
b) Implement classes and methods identified in step a.
c) Better nib support for writing. Reading appears to work very well, writing nibs has a few issues which I have identified and will document as bugs.
d) perhaps more...
3) Theming
4) ObjC 2.0 (this is a nice to have...) :)

I also think that it's very important for us to stick to the goals which were set out in the blog posting I made here:

Some of the things in the list from my blog have been achieved with great thanks to those involved in doing so (in no particular order):

* Nicola for doing such a great job on gnustep-make, and FHS support and all of his other contributions,
* Fred for his awesome work on gnustep-gui and for helping to make Windows more usable,
* Richard for his tireless work on gnustep-base,
* Riccardo for work on various applications in GNUstep and GNUstep GAP which have helped to identify issues in GNUstep itself,
* Wolfgang Lux who has been a consistently excellent addition to the team since he started contributing
* everyone else who has worked on GNUstep over the past few years.

By giving thanks to these people above, I am, by no means, minimizing the contribution of anyone not mentioned above. :)

Other goals on the list from the blog haven't been achieved yet, but I believe that all of those points are central to GNUstep's success.

With some effort, I believe that we can make 2009 a really good year for GNUstep.

Update on Bean and Flexisheet...

Well, after a number of improvements recently, Bean is a hair's breadth from working without a hitch. Please see the attached picture below. The only thing left now is to implement some new NSDocument methods which Bean requires in order to work and we should be good to go. These methods are: 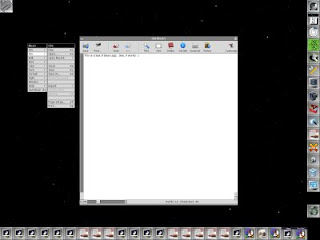 We're also very close to getting the spreadsheet that we were working on going. It's called Flexisheet. You can see a screenshot of it here: 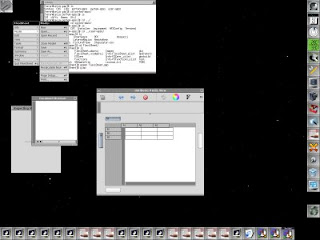 The apps themselves are virtually unchanged from their Mac OS X versions. The only corrections necessary in Bean were to not use isEqualTo: (which is a scripting method) and to use isEqual: to compare some objects. Other than that these apps work right from the source. Bean, in fact is built using pbxbuild which is a tool in GNUstep that builds .xcode projects directly. The pbxbuild tool is still in beta but works very well on Windows and all Unixes (Linux, BSD, Solaris). Your help in testing it would be appreciated.