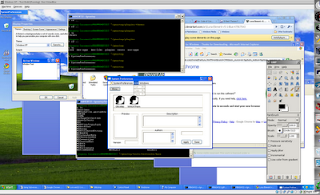 Here is a picture of the Windows theme for GNUstep. This is just the initial effort. It shall be more complete in weeks to come.

Currently there is work progressing on themes on GNUstep... here are the links for that:

We also have a native theme working on Windows. I will have a picture of that soon as well. For now the code is in the repository in the plugins section.

One thing this post doesn't show is the in-windows menus which we already have implemented. Those combined with this should give the user a totally native experience with GNUstep.

Here is the code for the gtk theme:

Here is a post about a guy trying to read webloc files on Windows. Guess which environment he chooses? ;)

All, recently our maintainer for Debian had to resign. Thank you, Hubert, for the many years you've given us.

This means that we are now seeking a maintainer for the Debian packages. I can't stress how important this is, since it means that, unless we can find one, we will no longer be distributed with Debian and Ubuntu and other Debian related distributions.

After months of work, I'm pleased to announce that eggPlant, a product of TestPlant, has been successfully ported to Linux using GNUstep. All of the relavent improvements to GNUstep have been contributed back to the project and have already started to benefit the community as a whole.

TestPlant was formerly RedStone, Inc. You can visit their site at:

As many of you may or may not know I've been working with projects, individuals and companies which use Cocoa to help them get onto Linux and all of the other platforms we support by assisting them in porting their applications to GNUstep.

It's important to remember that GNUstep is, first and foremost, a development environment in it's own right. Just as important, however, is the fact that GNUstep can be also used to port complex applications over to Linux and other platforms from Cocoa.

Helping companies such as this has two beneficial effects on our community... it encourages participation from developers since they can see it's being used and maintained actively and it also, through their participation, allows them to contribute code back to us that ultimately benefits the entire community.

Well, SCALE is over and I can only say that it was great. :) I got to meet Scott Christley and I also got to meet the WindowMaker team. They're all awesome people.

SCALE is a large conference. There were a couple of thousand people there. We had about 150 people take fliers from our booth and ask about GNUstep and we did get some of the "So, when are you guys putting out the next version of WindowMaker" questions. :) I told those people about what GNUstep was and sent them to our friends at booth #37, which was the WindowMaker team.

I tried to emphasize a few things with the people who came by:
I showed them Gorm and ProjectCenter. I also showed them some applications running on both GNUstep and on the Mac to illustrate portability. Scott and I discussed that, for the next conference, we want to have a DO demonstration and some more database applications to show as well as Etoile. I did show them the Etoile website and told people about both of our appearances on FLOSS Weekly (#44 and #56 for those who havent' listened yet). Scott also had some suggestions about how to improve things the next time around which I have taken to heart. He said we should concentrate more on apps as well as emphasize our development environment much more.

Most hard core developers knew who we were right off the bat, some people still had us confused with WindowMaker, but fixing that just took some explaining. Just the simple act of being here was worth it just to educate people and to make them aware of what's going on with GNUstep.

I was also approached by someone from the LinuxFund who is intersted in helping us to reach 1.0 and wants us to keep in touch with them.

We ended the first day by having dinner with the WindowMaker team: John, Erin and Kevin. We discussed the possibilities of more cooperation between GNUstep and WindowMaker, specifically getting rid of WiNGS in WindowMaker and replacing it with GNUstep.

I also got to meet Randal Schwartz (author of a number of perl books and host on FLOSS Weekly). The night before the conference I saw this: 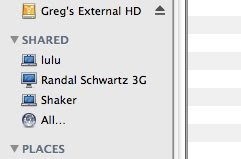 I told him (jokingly) that I was tempted to make a post called "I can has Randal's 3G?" but I resisted the temptation. ;)

The second day of the conference wasn't nearly as busy as the first. Sunday seems to be a lot slower than Saturday at these things.

All in all, I think the simple act of being there was a good thing for GNUstep. I'm definitely planning on going to SCALE next year and, if possible, other conferences which I can easily make it to in the future. :)
at February 23, 2009 78 comments: